About two months ago, I received an email with the subject line “Beauvais Missal.” My interest piqued, I opened the message to find Maine bookseller Seth Thayer writing to report that he had found a leaf of the Missal “in a trunk in a client’s house in Maine.”

This leaf-in-a-box turned out to be the 100th identified folio of the Beauvais Missal. But there was much more.

For several days, Seth continued to send images of additional leaves he found in the trunk, eleven in all. The client believed them to have been purchased in New York in the 1950s and stored in the trunk since the 1970s. They hadn’t seen the light of day in forty years.

Several of the leaves looked very familiar to me, and after some research I was able to identify nearly all of them as having passed through the hands of our old friend Otto F. Ege or his close associate Philip Duschnes. 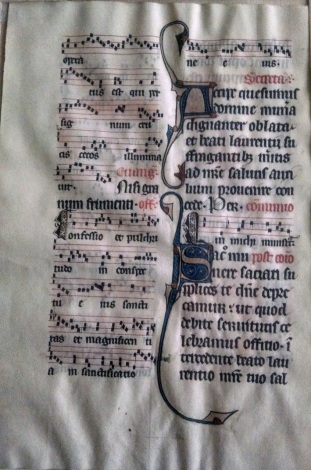 This Beauvais Missal leaf preserves liturgy for the Office of St. Lawrence (10 August) and is consecutive with a leaf belonging to a collector in Bath, Ohio. The leaf is unusual in that it provides complete choral pieces instead of the incipits found elsewhere in the manuscript, because of St. Lawrence’s status as an Apostle. For example, in this image of the verso, the versicle and offertory are given in full on multiple staves of music.

Another exciting find: two leaves from a thirteenth-century processional made for the nuns of Wilton Abbey. The manuscript is the subject of important work being done by  University of Northern Iowa musicologist Alison Altstatt. Leaves of this processional were used by Ege as no. 8 in his “Fifty Original Leaves” portfolio; some images of those leaves can be found here, but to really learn about this important manuscript, spend some time with this video and watch for Prof. Altstatt’s forthcoming article, “Re-membering the Wilton Processional” in Notes: The Quarterly Journal of the Music Library Association, 72:4 (June 2016), 590-632.

Leaf of the Wilton Processional

The Processional leaf above was housed in a red-fillet matte of the style typically used by New York dealer Philip Duschnes and his associate Otto Ege. The Processional leaf below was found in a custom frame and includes the label of the seller, Livingston Galleries in New York. This suggests that the two leaves may have been purchased from different sources at different times, begging the question as to whether the owner realized they were from the same manuscript and purchased one because he already owned the other.

Another Leaf of the Wilton Processional

When Thayer removed the framed leaf from its glass, he found that it, too, was housed in the same style matte. But there was another surprise in the frame: a New York newspaper from June 5, 1946. This is actually a really important piece of evidence, as it helps to establish the date when the leaf was framed (soon after June 5, 1946), which in turn helps establish when the Wilton Processional was broken (before then). This pushes back by at least two years the possible date of Ege and Duschnes’ acquisition of this manuscript as recorded by Gwara (Otto Ege’s Manuscripts, p. 346). It is likely they acquired and broke up the manuscript before June of 1946 [n.b. Peter Kidd’s comment below].

There are several layers of provenance to be read in this particular leaf. First, its origin: part of a processional made for the nuns of Wilton Abbey in the thirteenth century. Then, the red fillet matte, into which it was secured before June 1946, probably by Philip Duschnes (given the New York provenance, as opposed to Ege in Ohio). Then, the frame, into which it was placed by Livingston Galleries in June 1946. Then, the trunk, in which it was stored in the 1970s.

Most of the other leaves can be definitively identified as having passed through the hands of Philip Duschnes and Otto Ege; again, given the New York connection, it is likely that these particular leaves were sold by Duschnes rather than Ege. In the montage below, clockwise from the upper left and with reference to Scott Gwara’s Otto Ege’s Manuscripts, these leaves are found in his handlist as numbers 115, 73 (two leaves), 65, 82, 99, and 100. 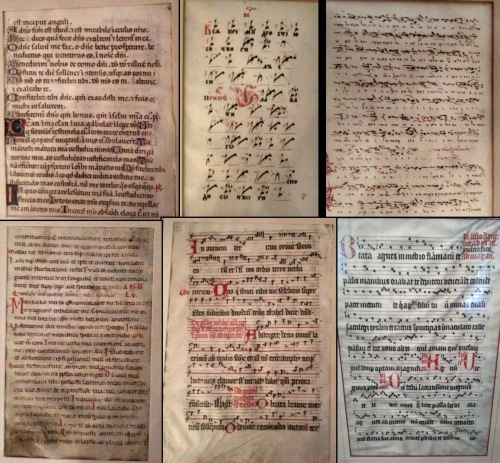 The final leaf (shown to the right), from a large choirbook, cannot be positively identified in Gwara’s handlist, but it may be lurking in there somewhere.

Thayer was committed to finding an institutional home for the leaves, where they could be used for study and teaching. He was successful; the entire group has just been acquired by Colby College in Waterville, Maine.

A Happy Ending: Students and faculty from Colby College examining the new leaves