I know it’s been a month since I last posted, but I have a good excuse. I’ve been in Australia for several weeks, visiting my daughter (who is studying abroad there this term) and exploring antipodal medieval manuscripts online and in person. I was invited to deliver a lecture at The Medieval and Early Modern Centre at the University of Sydney, and this post is based on that lecture.

Collections of medieval and Renaissance manuscripts in Australia and New Zealand were primarily developed by bequest, given by British collectors. As such, most of the manuscripts have a direct British provenance and didn’t come through the hands of dealers we have come to know in our explorations of North American collections (such as Duschnes, Ege, Ferrini, Rosenthal and Kraus, among others). Even so, while exploring online collections in Australia and New Zealand, I was able to identify later acquisitions of single leaves that have connections to single leaves in North America. Welcome to the Manuscript Road Trip: Australian Edition.

Sydney Harbor at sunset (photo by me)

Australia and New Zealand are fortunate in that detailed surveys have been undertaken of the national corpus of medieval manuscripts by such esteemed experts as Christopher de Hamel, K. V. Sinclair, Margaret Manion, Vera Vines, and Alexandra Barratt, among others. There are dozens of pre-1600 European manuscripts in antipodal collections, many of which have been imaged and made available online.

Digitization projects are underway at the University of Sydney, where images have been posted online from several manuscripts and a handlist can be found here. A Parisian Book of Hours (RB Add. Ms.58) is noteworthy, as is the University’s Spanish Forger cutting (at left). The spectacular manuscript collection at the State Library of Victoria has been digitized as well, and many Australian collections have added records, if not images, to the national Trove database (try searching for keyword “manuscript,” with date limits of 1000 – 1600, limited to Australian collections).

As my readers will have noticed, I am always on the lookout for single leaves that can be traced back to Otto Ege. Lo and behold, there is indeed a previously unrecorded “Original Leaves from Famous Books: Eight Centuries” set at the State Library of Queensland in Brisbane. This particular portfolio is comprised of printed and manuscript leaves: the handwritten pages come from a thirteenth-century Bible, a fourteenth-century Aristotle, and a fifteenth-century copy of Livy’s History of Rome. These are not the most visually impressive group. Ege didn’t select them any art historical “wow” factor. He used them here as examples of the development of lettering, as calligraphic specimens of Gothic bookhand, Gothic cursive, and Humanistic bookhand: 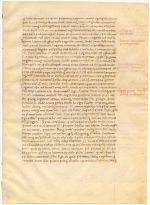 Based on my survey of Sinclair’s catalogue of Australian collections and additional information kindly sent to me by U. Sydney Professor Nick Sparks, I count well over 100 single leaves in Australia. A few have been imaged and are online, for example, these University of Tasmania leaves from two different Books of Hours. At the University of Sydney, there are several dozen single leaves, all of which are worthy of study and some of which may be connected to known leaves elsewhere. In 1967, Sinclair identified four leaves in private Sydney collections as having come from the same fifteenth-century French Breviary: a bifolium in collection of Sir Edward Ford (Sinclair no. 67), and one each in the collections of J. M Ward (Sinclair no. 83) and R. I. Jack (Sinclair no. 85). Sinclair’s descriptions of single leaves are extremely useful because they provide not only the date and place of origin but also the dimensions and the number of lines per page, objective data that can help identify leaves that came from the same parent manuscript. The data for the four breviary leaves is consistent with a manuscript dismantled by Otto Ege in the 1940s and now used as leaf 24 in his “Fifty Original Leaves” set. I haven’t confirmed this identification yet, but I am ever hopeful. Once collections begin digitizing their leaves, more such connections will surely be found. I am certain there are more leaves of this gorgeous fourteenth-century English antiphonal out there somewhere:

Now let’s head down to New Zealand and see what we can find there. 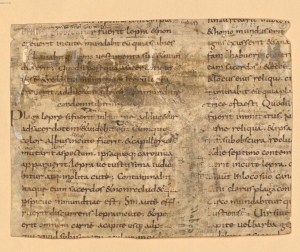 As in Australia, the medieval manuscripts in New Zealand have been expertly catalogued, by native New Zealander Christopher de Hamel and by Alexandra Barratt, among others. A forthcoming study by Alexandra Barratt of leaves in Auckland will focus on important fragments still being used as binding scrap. At left is one such example, hiding in the gutter of an early printed book, an incunable. These narrow strips of recycled parchment are called binding stays, and they serve to protect paper from tearing as the gatherings are sewn together. These hidden treasures are difficult to photograph, and difficult to work with, but the payoff for that effort can be enormous. Barratt has confirmed that these ninth-century binding stays come from the same manuscript as the fragment above, from the Bayerische Staatsbibliothek in Munich. You can read more about the project at http://medievalbookbindings.com/. 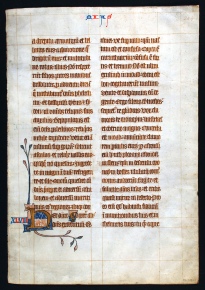 In the 1989 catalogue, Medieval and Renaissance Manuscripts in New Zealand Collections, de Hamel draws several connections between leaves in New Zealand and known leaves elsewhere. One such is Dunedin Public Library Reed Fragment 13 (right), a leaf of a lovely English Bible sometimes known as the Bohun Bible, of which several dozen other leaves are known in collections in Europe, England and the U.S. including Houghton MS Typ 966 at Harvard University, right around the corner from my office.

Also of note are the stunners collectively known as Dunedin Frag. 17, three leaves from a well-known Book of Hours attributed to the Boucicaut Master. Here’s a leaf from the same manuscript that I illustrated in my blog just a few weeks ago, from the University of North Carolina.

De Hamel also identifies two leaves in the Dunedin Public Library as having come from manuscripts known to have been dismembered by Otto Ege (more on this below). While looking through the New Zealand catalogue, however, the description of Dunedin Frag. 42 caught my eye: it is a lectionary from twelfth-century Italy of 22 lines per page that sounds a lot like the Ege lectionary we have met before. The dimensions are spot on as well. But without images, there’s no way to be absolutely sure.

Fortunately, the Dunedin library has recently imaged all of their codices and leaves and put them on a Flickr site accompanied by de Hamel’s metadata. Flickr is an easy and popular platform for presenting digitized manuscripts, in part because it allows for comments and crowdsourced cataloguing, a strategy that has been very successful for small collections in the U.S that don’t have the storage space or software to post the images on their own servers. Calling up the online image of Reed Fragment 42 confirms that it is indeed a leaf of Ege’s lectionary, “Fifty Original Leaves” (FOL) no. 3.

Now that the Dunedin fragments have been digitized and posted online, I can also confirm de Hamel’s identification of Reed Fragment 7 and Reed Fragment 51 as having come from the same manuscript as Ege leaves FOL 9 and FOL 2. The core collection was donated to the Dunedin Public Library in 1948 by Alfred Hamish Reed (1875 – 1975) along with a sizable bequest that has allowed the library to make more recent purchases, including Frag. 42 (purchased from Maggs Brothers in 1982) and Frag. 51 (purchased from Quaritch in 1985). Fragment 7 was purchased during Reed’s lifetime from W. A. Stewart in Morrinsville, Pennsylvania, in June 1952.

Also worth noting is that the Dunedin Reed Frag. 33 (below left) is from the same manuscript as one of the leaves at the University of Tasmania (below right). That’s quite a co-incidence. The original manuscript – a mid-fifteenth-century Book of Hours – belonged to a San Francisco collector named John Francis Neylan, who died in 1960. It was sold at Sotheby’s on 18 June 1962 (lot 121) to a London outfit called The Folio Society that was famous for dismembering books to sell as individual leaves or leaf-collections. The Dunedin library purchased their leaf from The Folio Society in 1963; it is unclear when or how the University of Tasmania acquired theirs. And in fact, there may be yet another leaf from this manuscript in Australia, at least there used to be one, at the University of New South Wales; Sinclair’s catalogue describes their MS 2 as a Book of Hours with identical dimensions to these and the same number of lines (Sinclair no. 18). Unfortunately, like many of the University of New South Wales manuscripts described by Sinclair, this leaf is now lost, so I cannot as yet confirm this identification. 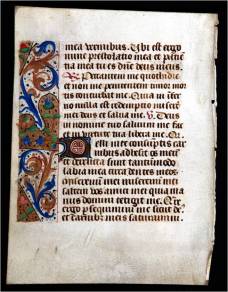 See you in West Virginia!