There are so many reasons to love New York City. Broadway, Central Park, Ellis Island, MOMA, Zabar’s, H&H…the list goes on and on. And for bibliophiles? New York is Heaven on Earth.  At last count, New York City was home to nearly 9,000 pre-1600 manuscripts in twenty-four collections, ranging from Washington Square all the way up to Ft. Tryon Park. These collections – among which are The Hispanic Society of America, the Livingston Masonic Library, the Museum of Biblical Art, and the Jewish Theological Seminary – are as diverse as the city they inhabit. While nothing beats wandering from collection to collection during Bibliography Week, you don’t actually have to go to Manhattan to see some of its greatest treasures. Many of these collections have a strong digital presence. 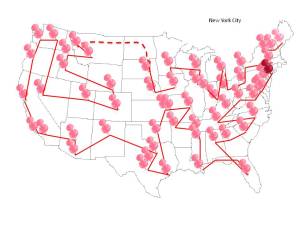 I’ve created a custom map to accompany this post, shown below and available online here. The metadata associated with each pin includes both literal and virtual addresses, so you can use this map to create your very own manuscript road trip around Manhattan. More information about all of these collections (as well as defunct collections recorded in the Census and Supplement) is available in the online Directory of Collections in the United States and Canada with Pre-1600 Manuscript Holdings (pp. 81 – 96). 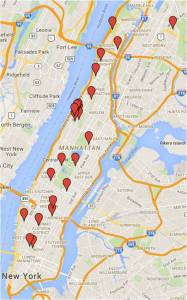 The best place to start when looking for digitized New York manuscripts is the online repository Digital Scriptorium. From the “Browse by Location” page, you can easily link to images from more than half of the NYC collections:

Leaf from the pontifical made for Charles-Orland, son of Charles VIII and Anne de Bretagne (Fordham University, Walsh Library, Archives and Special Collections, MS Item 05, ca. 1495). The remainder of the volume was later owned by Estelle Doheny (Faye and Bond, Supplement, p. 12 n. 42), then sold with her collection at Christie’s, London, 2 Dec. 1987, lot 172, to Tenschert.

With so many great collections to choose from, it’s hard to know where to begin. Fortunately, the Digital Scriptorium “Advanced Search” page allows you to narrow your search by keywords, title, author, date range, or any number of other fields.

The Morgan Library and Museum houses one of the greatest manuscript collections in the country. Like Henry Walters, Henry Huntington, and other collectors we’ve met on our virtual journey across the country, Pierpont Morgan was a man of extraordinary wealth who was also an important and avid art collector. This from the Library’s website: “Mr. Morgan’s library, as it was known in his lifetime, was built between 1902 and 1906 adjacent to his New York residence at Madison Avenue and 36th Street. Designed by Charles McKim of the architectural firm McKim, Mead & White, the library was intended as something more than a repository of rare materials. Majestic in appearance yet intimate in scale, the structure was to reflect the nature and stature of its holdings. The result was an Italian Renaissance-style palazzo with three magnificent rooms epitomizing America’s Age of Elegance. Completed three years before McKim’s death, it is considered by many to be his masterpiece. In 1924, eleven years after Pierpont Morgan’s death, his son, J. P. Morgan, Jr. (1867–1943), known as Jack, realized that the library had become too important to remain in private hands. In what constituted one of the most momentous cultural gifts in U.S. history, he fulfilled his father’s dream of making the library and its treasures available to scholars and the public alike by transforming it into a public institution.” We encountered J. P. Morgan’s librarian, Belle da Costa Greene, in this blogpost a few months ago; it was she who was responsible for identifying the characteristics of forgeries perpetrated by The Spanish Forger, whom she also named.

Thousands of images from Morgan manuscripts are available in the CORSAIR database, including one of my personal favorites, the Hours of Catherine of Cleves. Every page of this glorious book is full of surprises and can be viewed in stunning high-resolution on the Library’s website.

Another Morgan masterpiece is The Black Hours, written in luminous silver and gold ink on black-stained parchment:

A few blocks uptown from The Morgan is The New York Public Library, the largest municipal manuscript collection in the country. 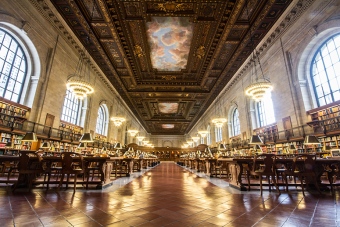 NYPL houses more than 500 manuscripts in three collections: The Manuscripts and Archives Division, The Spencer Collection, and the Dorot Jewish Division. One hundred masterpieces from the NYPL collection were the subject of a magnificent exhibit in 2005, The Splendor of the Word, curated by Jonathan J. G. Alexander, James H. Marrow, and Lucy Freeman Sandler, with two dozen additional experts contributing to the catalogue. Highlights from the show included:

From the Public Library, head north on 5th Avenue to the Upper East Side and the imposing Metropolitan Museum of Art. There’s plenty of medieval art on display, and even more to be found on the website.

A collections keyword search for “manuscripts and illuminations” results in more than 300 images from dozens of manuscripts, some of which, like the gorgeous cutting from a late twelfth-century French Bible shown below, are actually housed at our next, and last, stop.

The Cloisters, in Ft. Tryon Park at the northern end of Manhattan, houses a large part of the Met’s medieval collection. Here, in this museum assembled from architectural elements of at least four different medieval structures, you can immerse yourself in the Middle Ages, viewing sculpture, paintings, furniture, metalwork, glass, jewelry, the famed Unicorn Tapestries, and, of course, manuscripts. 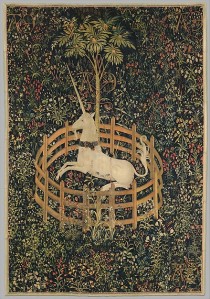 The Unicorn in Captivity (from The Unicorn Tapestries, The Cloisters)

Among the manuscripts on permanent exhibit at The Cloisters is one of the great masterpieces of the fifteenth century, the Belles Heures of Jean, Duc de Berry, illuminated by the Limbourg Brothers around 1405. More than 140 images of this manuscript are available on the museum’s website and are described in detail on pages devoted to a 2010 exhibition, The Art of Illumination. The manuscript is copiously illustrated and includes many unusual images, such as this full-page miniature of St. Katherine in her study:

Looks like we’ll be celebrating the New Year in New Haven. See you in Connecticut!