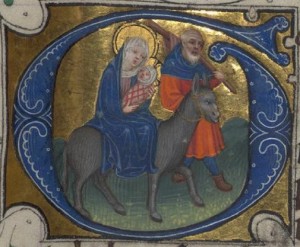 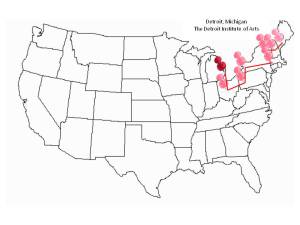 Michigan is Great Lakes country, its Upper and Lower peninsulas lapped by four of the five inland seas. It’s also the site of a major annual pilgrimage. Every year in May, thousands of medievalists from around the world descend on Kalamazoo, Michigan, for the planet’s largest gathering of students, faculty, scholars and fans of the Middle Ages, the International Congress on Medieval Studies at Western Michigan University. Scholarly plenaries, informative general sessions, lively round-table discussions, and pedagogical workshops are supplemented by musical performances and film screenings and demonstrations of medieval brewing techniques (always a favorite). If you’ve never been, I highly recommend it.

It being October, however, we’re not heading for Kalamazoo on this trip. Instead, we’ll take I-75 along the western shore of Lake Erie to reach the oft-maligned city of Detroit. 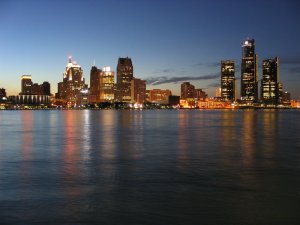 As many of my U.S. readers will know, the City of Detroit filed for bankruptcy on 18 July 2013, and the months since have seen workers furloughed, municipal services shuttered, and rumors flying about the inevitable sale of City-owned assets such as the Airport and public parkland. One of the most alarming rumors was the impending liquidation of works of art belonging to the Detroit Institute of Arts. The Institute argued that its holdings were not legally eligible for sale (a series of statements from the DIA can be found here), but it was reported that Christie’s auction house had been contacted about possible sales anyway. The worldwide community of art historians and art lovers has been called into action, and a widely-circulated petition authored by Harvard University’s Prof. Jeffrey Hamburger has garnered more than 5,000 signatures as of this writing. It now seems clear that the law is on the side of the DIA and that the deaccessions are unlikely to take place, but I urge all of you to keep an eye on this situation as no definitive resolution will be reached until sometime in 2014.

These works of art are much more than assets or investments to be liquidated as a short-term solution to the City’s fiscal crisis. They represent the patrimony of the City, the State and the Country, important examples of the artistic, cultural and historic heritage of all Americans, whatever their origin. And in case you were wondering, that artistic, cultural and historic heritage preserved at the DIA includes medieval manuscripts.

The Institute holds many Arabic and Persian manuscripts and manuscript fragments, outside the scope of this blog. There are only a few examples of Western medieval manuscript illumination, but what there is, is really outstanding. Let’s start with this extraordinary initial from late fourteenth-century Florence, a scene of Pentecost within the letter S: 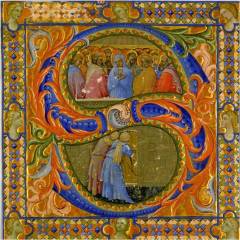 Pentecost in the letter S, from Florence, Santa Maria Nuova, before 1405 (Detroit Institute of Arts, 37.133.A)

This initial is very large, 9 1/2 x 9 1/2 inches. It was probably cut from a giant choirbook, most likely a gradual (a book containing choir music for mass), in which case it would have been the opening initial of the Introit for the Pentecost Mass, “Spiritus domini replevit.” In the upper compartment of the letter [S] we find the Virgin Mary surrounded by the Apostles, with the Holy Spirit, in the form of rays of golden light, descending from above. Two women attempt to peek in through the door below, and the whole scene is surrounded by a decorative border that includes the busts of eight women looking towards the central scene.

There are a few others leaves as well, but the real treasures of the Institute’s medieval manuscript holdings are these two late-thirteenth-century illustrations of the Apocalypse: 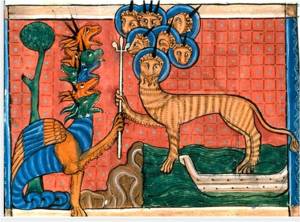 The Beast of the Sea Encounters the Dragon, from the Burckhardt-Wildt Apocalypse , France, ca. 1295 (Detroit Institute of Arts, Acc. 1983.20A, verso)

These fearsome miniatures appear back-to-back, on recto and verso of a single sheet. This is the top half of the leaf; originally, there was text below each miniature (look carefully at the bottom margin of The Dragon Waging War and you’ll see a tiny sliver of the top line of text).  On the recto is an illustration of Apocalypse 12:17, showing the battle of the seven-headed dragon against the descendents of the Woman Clothed in the Sun (“The dragon went to make war with the rest of the woman’s seed, who keep the commandments of God, and have the testimony of Jesus”). On the verso, illustrating Apocalypse 13:2-3, the dragon gives a scepter of authority to the seven-headed monster from the sea (“And the beast which I saw was like a leopard, and his feet were like those of a bear, and his mouth like the mouth of a lion. And the dragon gave him his power and his throne and great authority”). This manuscript falls into the great tradition of illustrating the Apocalypse in medieval manuscripts – the ethereal and terrifying visions described by St. John easily lend themselves to fantastical outpourings of creativity and visualization, and medieval artists let their imaginations run wild. Google “medieval manuscripts” and “Apocalypse” and you’ll see what I mean. Better yet, find yourself a copy of Richard Emmerson and Bernard McGinn’s The Apocalypse in the Middle Ages.

The manuscript from which these miniatures were cut is known as the Burckhardt-Wildt Apocalypse, named for an early owner, Daniel Burckhardt-Wildt (1759-1819) of Basel. The title is misleading, however, as the manuscript has never been known to scholarship as a complete codex. Peter Birmann, a Swiss painter and dealer, likely cut up the manuscript in hopes of selling the miniatures off piecemeal, but instead he mounted seventy-seven of the miniatures in an album (the original manuscript apparently consisted of eighty-eight illustrations on fifty leaves; eleven miniatures are lost) and sold them en masse to Burckhardt-Wildt in 1796. The album stayed in the possession of his descendants until the miniatures were sold as separate lots at Sotheby’s London on 25 April 1983, lots 31-68. The DIA cutting was lot 52 and was originally folio 26 of the manuscript, according to the reconstruction undertaken by Sotheby’s at the time of the sale. After that sale, the miniatures were scattered across the globe and can now be found at institutions such as the Nationalmuseum in Stockholm, the Pierpont Morgan Library & Museum in New York, and the Walters Art Museum in Baltimore. Several have made their way back onto the market in recent years (here’s one that was offered by Les Enluminures in 2004). There are even two cuttings (i.e. four miniatures) at the Cleveland Museum of Art, a site we visited just last week. Much has been written about this manuscript (see the DIA site for some of the most important references, although that list is not entirely up-to-date); all agree that these miniatures are important examples of late thirteenth-century French illumination and, it can be argued, fill gaps in the art historical tradition of Apocalypse manuscripts. They’re also hypnotically beautiful, and the people of Detroit are fortunate to have access to them.

While researching the medieval manuscripts belonging to the Detroit Institute of Arts, I encountered Loren D. Estleman’s novel, The Hours of the Virgin, a murder mystery that revolves around a fictional sixteenth-century Book of Hours stolen from the DIA. The blurb reads, “Detroit is no place for virgins, or gentlemen. Walker, who is neither, follows the 50-year-old trail of a stolen manuscript across the bleak landscape of a dead city, coming face to face with the man who murdered his partner 20 years ago.” Bleak and dead? On the contrary, based on the response to the threat of deaccession, I would say Detroit is actually alive and well where it really matters.

Next week, we’ll stop in South Bend, Indiana, to see what’s happening at the University of Notre Dame before heading down to Bloomington.