Manuscript Road Trip: Toto, I have a Feeling we ARE in Kansas

If you’re going to travel the United States on a virtual manuscript road trip, Kansas is a must-see digital destination.

The jewel of the Midwest is the collection of the Kenneth Spencer Research Library at the University of Kansas in Lawrence. Images from more than 200 codices and leaves are available through Digital Scriptorium, including an important collection of charters and dozens of single leaves. With such riches to choose from, it’s hard to know where to begin! Here are a few that caught my eye… 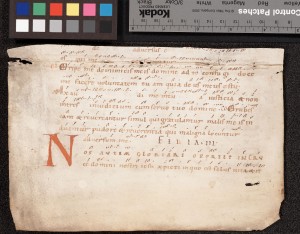 My first job as a manuscript cataloguer was at the Beinecke Library at Yale University, where there are hundreds of manuscript codices, leaves and fragments. That’s where I developed my taste for objects like the fragment at the right, the lower half of a leaf from an eleventh-century South German or Austrian antiphonal. The adiastematic neumes recorded between the lines of text are typical of the region and period; this notation functioned primarily as a mnemonic, with each symbol representing a particular series of relative tones and serving as a memory-jog for monks who had spent years memorizing the chants.

The antiphonal at left, also Germanic but written several hundred years later, shows very nicely the developments that had since taken place in musical notation. In this example, the notation could still be called neumatic, but now the neumes are placed on a staff that clearly shows their pitch, making them diastematic. The neumes are also showing signs of the “hufnagel” style that became prevalent in Germany (“hoof-nail,” named for the distinctive shape of the single-stroke neumes that look like small nails).

At right is one of two examples in the collection of Beneventan script, an eleventh-century fragment that includes part of what was once a lovely and colorful initial.

I find myself particularly drawn to fragments like the next two that clearly show how they were re-used in later bindings.

Below, this leaf from a tenth-century theological text was used as a “comb” support in the spine of a later binding, with the vertical strips surrounding the protruding cords and the trapezoidal section wrapping around onto the front or back cover. The piece would have been hidden by a leather cover and remained unknown until the book was repaired or re-covered. Below, several strips of a twelfth-century missal were retrieved from the binding in which they were used and reassembled into their original configuration.

I know fragments aren’t to everyone’s taste, and for those of you who like your manuscripts illuminated, the Spencer collection has plenty of art historical wonders to choose from.

The leaf below is a calendar page from what must have once been an exquisite late-fifteenth-century French Book of Hours. The two-column format is unusual for a calendar, allowing an entire month to fit on each side (here, September, with October on the verso).

In the vignettes at the top, we find a peasant sowing seeds, one of the traditional “labors” of September, while the scales at the right symbolize Libra. The calendar includes several unusual saints such as Godegrandus, Bishop of Senlis, on September 3 and Signus on September 19, but appears to have been written for the Use of Paris.

And finally, this full-page stunningly illuminated [B] begins the twelfth-century Chur Psalter, [B] being the first letter of the first word of the first Psalm, “Beatus vir”. The two compartments of the [B] are illustrated by the Holy Spirit descending from above in the form of a bird and, below, King David playing a harp.

I encourage you to explore the Spencer Center’s Digital Scriptorium records. I’ve only scratched the surface of a collection that is quite comprehensive in geographic, chronological and stylistic scope.

We’ll make a few more quick stops before leaving the state. There are a few leaves at the Spencer Museum of Art on the KU campus; search the collection database for “illuminated manuscript” to find them. The Sir John and Mary Craig Scripture Collection at the University of St. Mary in Leavenworth owns several dozen leaves that have not yet been digitized, and the Quayle Bible Collection at Baker University in Baldwin City owns several medieval manuscripts as well. Both collections were formed by collectors of strong Christian faith (Catholics John and Mary Craig for the former and Methodist Bishop William Alfred Quayle for the latter) who prized these manuscripts not just for their age and beauty but because of the sacred texts they transmitted.

Next week we’ll head eastward and spend some time in St. Louis.

4 responses to “Manuscript Road Trip: Toto, I have a Feeling we ARE in Kansas”