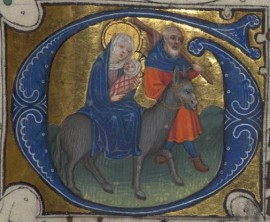 We’ll pick up where we left off at the end of 2013, heading west through Utah towards Nevada.

When Melissa Conway and I published our Directory of Institutions in the United States and Canada with Pre-1600 Manuscript Holdings, we knew of no manuscripts in the entire state of Nevada. As it turns out, until recently the Nevada Museum of Art did own four medieval manuscripts. All were de-accessioned in 2013 to raise funds for the Museum, since they did not really fit the Museum’s collection parameters. The manuscripts were sold by Christie’s on 12 June 2013 as lots 23, 24, 25, and 26.

Happily, these turn out not to have been the only medieval manuscripts in the state of Nevada after all. Further internet sleuthing and correspondence with several very helpful curators and faculty has resulted in one collection for us to add to the next edition of the Directory: the University of Nevada in Reno.

The University of Nevada-Reno owns several medieval leaves along with an impressive quarto-sized codex that has been little studied (hence the minimal MARC record). The images below were generously sent to me by curator Donnelyn Curtis. The page on the left of the opening is from the end of a breviary, preserving what appears to be the Common of Evangelists. The spine is broken, and at least one quire is missing. On the right, the historiated initial [B] illustrating King David begins a Ferial Psalter (“Beatus vir,” Psalm 1; detail below). Based on other images I’ve seen, the codex actually seems to be a Book of Hours, Breviary AND Ferial Psalter in one binding, comprising several hundred leaves. The manuscript was written in northern France in the mid-fifteenth century and was given to the Library by Gareth Hughes in 1964. 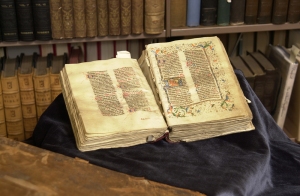 Codex given by Gareth Hughes, Special Collections, University of Nevada at Reno 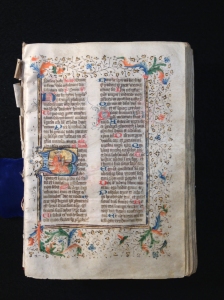 You can see a bit more of the manuscript in this clip, provided to me by Stephen Lyons: 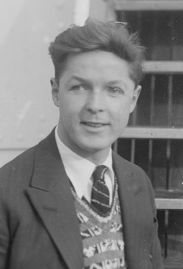 We’ve met some interesting characters in our travels so far, but we haven’t encountered anyone like Gareth Hughes. Born William John Hughes in 1894, Gareth Hughes was a Welsh actor who made a name for himself on Broadway in the 1910s and in the Hollywood silent film industry of the 1920s.

Hughes enjoyed the lavish and perhaps even promiscuous lifestyle of a Hollywood darling throughout the 1920s, and his opulent Los Angeles home revealed an early interest in the Gothic aesthetic. He continued to act in film and onstage sporadically even after the 1929 stock market crash left him penniless. His work in the 1930s as Director of  Shakespearean and Religious Theatre in Los Angeles may have spurred a religious transformation; in the early 1940s, Hughes took monastic vows at the Protestant Episcopal Monastery of the Society of St. John the Evangelist in Cambridge, Massachusetts, taking the name “Brother David” (perhaps in honor of St. David, patron of Wales). He was sent to Nevada in 1944 as a missionary to the Paiute tribe at Pyramid Lake where he served with fervor and devotion for more than a decade. 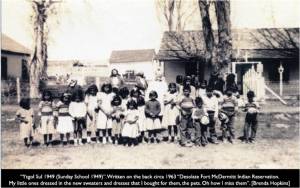 Gareth Hughes with his young mission charges in 1949 (see http://intothelonging.com/)

While teaching at Pyramid Lake, Hughes joined the English Department at the University of Nevada in Reno, contributing a portion of his earnings to the Mission. While he found his missionary work extremely satisfying, it was exhausting and difficult. He left in 1956 and took a position as an officiant at a Reno wedding chapel.

After a brief return to Wales, Hughes retired to California in 1958 to live the remainder of his life in the Motion Picture Country Home in Woodland Hills, a retirement community for members of the film industry. He died in 1965 of complications from byssinosis, a lint-born respiratory disease he contracted from years of sorting donated clothing at Pyramid Lake, and his cremated remains were buried at the Masonic Memorial Gardens cemetery in Reno. 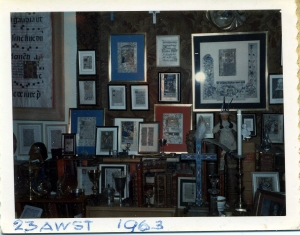 Gareth Hughes’ leaf collection on the wall of his cottage at the Motion Picture Country Home, 1963

No one knows when or how he acquired the Breviary/Psalter, but it was clearly part of a larger collection of rare books and manuscripts that he displayed in several public exhibits in Nevada after World War II. Hughes biographer Stephen Lyons believes that he must have acquired the manuscripts before the crash of 1929, probably over the course of several European trips taken during the 1920s. The photo at left (with thanks to Stephen Lyons) was taken at the Motion Picture Country Home in 1963; several of the leaves on the wall can be identified as leaves now in the possession of the University of Nevada-Reno. The undated image below may have been taken at the exhibit that accompanied the gift of the collection to the University of Nevada-Reno in 1964; note that Hughes is not dressed in clerical vestments, suggesting that he had left the Mission by this time.

Hughes at an exhibit of his collection (n.p., n.d., photo courtesy of Special Collections, University of Nevada-Reno)

The BoH/Breviary/Psalter is almost certainly the manuscript described in the second paragraph of this article from the Nevada State Journal (6 January 1946):

Specimens from a priceless collection of rare books were displayed by Dr. Gareth Hughes this week at a meeting of the Reno Poetry Workshop held at the home of Mrs. Ray J. Root. Dr. Hughes’ collection, described as “first rate” by literary authorities at the University of Nevada, includes an original Fourth Folio edition of Shakespeare dating back to the seventeenth century, a Quarto Edition of Shakespeare and a great many other early and rare editions.

Workshop members had the pleasure of examining a Fourteenth Century breviary written on vellum and bound in velvet and wood. Illustrations of the work are done in gold and lapis, and colors of the illuminations are described as clear and fresh. Dr. Hughes explained the use of the breviary entitled the “Book of Hours,” stating it was employed by wealthy families of the period for their private prayer services.

Dr. Hughes’ collection also includes manuscripts from the Sixteenth, Seventeenth and Eighteenth centuries, it was stated. At present pastor of the Union church at Wadsworth, Dr. Hughes is a former Shakespearian actor with experience both on the legitimate stage and in the early films. He presented several interpretations of Shakespearian characters before the Workshop, including his version of Shylock and scenes from Richard the Second, which were enthusiastically received. For a closing entertainment, he read Celtic and Gaelic poetry from a collection of songs, poems and chants by Fiona MacCloud, entitled “The Hills of Dreams”. His delivery of the poems was described as inspirational in meaning and beauty.

The story of his life as gleaned from various internet sources only scratches the surface of Gareth Hughes’ fascinating journey, a journey on which the Breviary/Psalter was his sometime companion. These quotes, gathered from biographer Stephen Lyons’ website, seem to perfectly capture the varied facets of Gareth Hughes’ life and work:

Isadora Duncan called him “the worlds greatest dancer”.
David Belasco, legend of American Theatre, thought he brought to mind “green fields, altar candles – and a brothel.”
Cecil B. De Mille called him the “young idealist”.
The Bishop of Nevada wrote of him “He is the only white man I have ever known who seems to win immediately the unreserved affection of the Paiute people.  He is the most effective teacher of the simple essentials of the Catholic faith I have ever known”.

I suspect Hughes himself would have been most proud of the latter.

n.b. My thanks to Donnelyn Curtis (University of Nevada-Reno Head of Special Collections) for the images and to Stephen Lyons and Kelvin Guy for much of the biographical information related above.

5 responses to “Manuscript Road Trip: A Welshman in Reno”